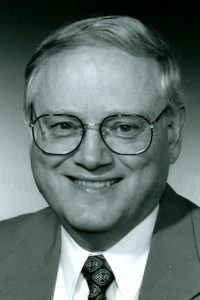 Edward Uprichard was Provost at the University of North Carolina at Greensboro (UNCG) from 1995 to 2007, and Dean of the School of Education at UNCG from 1988 to 1995. Uprichard received his B.A. in mathematics education from the State University of New York at Fredonia in 1964, and his M.S. and Ph.D. degrees in Mahematics Education from Syracuse University in 1966 and 1969, respectively. From 1969 to 1988, Uprichard was a professor in the College of Education at the University of South Florida. During his time as Dean of the School of Education at UNCG, Uprichard created the SERVE Center, a federal educational laboratory and think tank. During his time as Provost, Uprichard spearheaded the development of the Lloyd International Honors College. He also greatly expanded the research agenda and infrastructure of UNCG, resulting in UNCG’s rating by the Carnegie Foundation as a research university with high research activity. In addition, he increased admission and standards for the University, lowered acceptance rates, and increased enrollment.