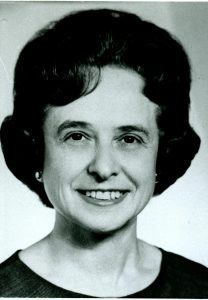 Naomi Albanese was born in Pennsylvania in 1916 and she served as Dean of the School of Home Economics from 1958 to 1982. Before coming to the Women’s College (now UNCG) in 1958, Albanese served as a high school home economics teacher in Pennsylvania from 1942 to 1950, and the college dietician at Glenville State College in West Virginia from 1950-1953. She began her graduate studies at Ohio State University in 1951 while working at Glenville State. From 1953 to 1955, she was able to pursue her studies full time and earned her Ph.D. from Ohio State in 1955. Through her voluminous publications and frequent speaking engagements throughout her long career, she became nationally recognized, and served a consultant to several other universities, including West Virginia University, Purdue University, and Memphis State University.

Much of Dr. Albanese’s professional work and publications centered on nutrition and wellness in children. In a 1964 article in the Greensboro News and Observer, the reporter observed that Albanese was known for working especially long days as “is in her office each morning by 8 o’clock, and she frequently remains there until 7 p.m.”

Following her election as the president of the American Home Economics Association in 1971, she began serving on several corporate boards including Blue Bell, Inc., Duke Power, and on the Federal Reserve Bank of Richmond. After her retirement from UNCG in 1982, Albanese continued serving on corporate boards as well as on the Board of Trustees of her undergraduate alma mater, Muskingum College, in Ohio.