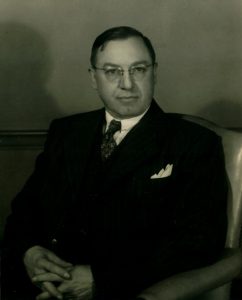 Dr. Albert S. Keister arrived at the North Carolina College for Women (now UNCG) in 1924, halfway through completing his PhD in economics at the University of Chicago (a degree he completed in 1927). Upon his hiring, he taught courses in sociology and political science, as the school had no formal economics department. He also taught a number of extension classes around the state of North Carolina.

In 1925, in one of these extension courses, he was asked by a student “what a belief in evolution did to one who believed in the Bible?” Keister responded that accepting evolution “forced the person to hold that account of creation in the Book of Genesis was not literally true but only the attempt of a people to explain a mystery of life in a pre-scientific age, hence a form of mythology.” He also expressed that he “admired a teacher who was brave enough to speak plainly on both sides of the question.” Many religious community members objected to Keister’s statements and wrote letters and editorials calling for his removal from the faculty. Ultimately, President Julius Foust worked behind the scenes to convince the College’s Board of Directors that, in spite of the challenges, Keister should remain.

Keister later went on to serve on the Greensboro City Council from 1932 to 1938. During World War II, he served on the National Labor Relations Board. He also was a director of the Gate City Savings and Loan Association and the North Carolina National Band. he served as president of the Southern Economics Association. And, throughout his life, he remained an active member of the Presbyterian Church of the Covenant, where he headed their Campus Christian Life Committee following his retirement from the Woman’s College in 1956. This Committee was responsible for building the Presbyterian Student Center on the WC campus. Keister died in 1974 at the age of 86 after a battle with Parkinson’s Disease.