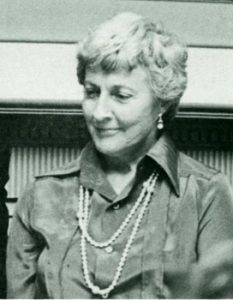 Anne Wortham Cone graduated from the Woman’s College (now UNCG) in 1935 with a degree in business. Together with her husband, Benjamin Cone (who served as mayor of Greensboro, from 1949 to 1951, and as President of Greensboro’s Moses Cone Hospital from 1956 to 1971), she was a prolific patron of Greensboro artists. She was also a major benefactor of UNCG, particularly of the Weatherspoon Art Gallery (now the Weatherspoon Art Museum). In 1989, the Cone Building was opened and named for Anne Cone and her husband.