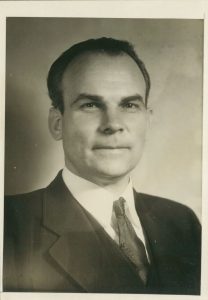 Archie Shaftesbury was a Professor of Biology and Zoology at the Woman’s College from 1924 until his retirement in 1959. Shortly upon his arrival at the college, Shaftesbury began taking groups of students to the North Carolina seashore during the summers to study the diversity of marine life there. This venture would evolve into the Beaufort Summer School and Carolina Marine Laboratory. Shaftesbury was the director of these programs for more than two decades. Born in 1893, Shaftesbury served during World War I and would return to his home state of Kanas where he earned his A.B. degree from Southwestern College in 1920. He earned his Ph.D. degree from Johns Hopkins University in 1934. When Shaftesbury retired from the Woman’s College in 1959, he took a position as head of the biology department at Lenoir Rhyne College in Hickory, North Carolina. Shaftesbury died in 1972.