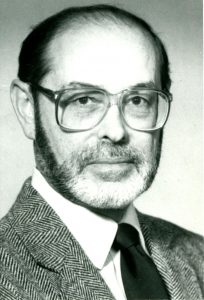 Jack Bardon joined the faculty of the University of North Carolina at Greensboro (UNCG) in 1976, as the University’s seventh Excellence Fund Professor and to serve as the director of the new Office of Educational Development in the School of Education. Prior to coming to UNCG, Bardon had been a psychology professor and department head at Rutgers University where he considered to be a pioneer in the field of school psychology. Bardon always thought of himself first as a “school psychologist,” and by the time of his leaving Rutgers, he was already recognized internationally as an expert in the field.

Originally from Cleveland, Ohio, Bardon received his B.A. from Western Reserve University. He began work as a school psychologist in 1952 at the Princeton Borough Schools in Princeton, New Jersey, while still working on his Ph.D. at the University of Pennsylvania (Penn).  It was during this time that he began to formulate his ideas about the practice of school psychology, including frequent consultation with teachers and direct classroom intervention.  He received his Ph.D. from Penn in 1956, and went to work as a psychologist in Princeton Schools in 1958.  He joined the Rutgers faculty in 1960.  He played a major role in developing Rutgers’ Graduate School of Applied and Professional Psychology, and under his guidance it became the most distinguished school psychology program in the nation.  From 1986 to 1988, Bardon served as interim dean of the School of Education at UNCG.  He traveled widely as a consultant to 50 universities, and was a consultant to the countries of Australia, New Zealand, and Norway in reforming their mental health programs.  In 1986, Bardon was invited—and accepted—by the Chinese Medical Association to tour mental health facilities in China with 25 other American psychologists.  Bardon retired in 1992 and died the following year, after a brief illness.