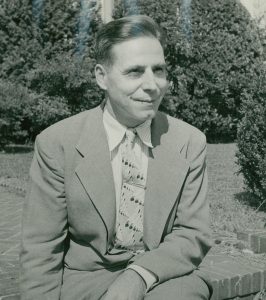 Adams spent three years as an English and Math instructor at Athens College, Greece between receiving his AB and starting his Bachelor of Science. During his summers in Greece, he would travel and attend universities such as Toulouse and Strasbourg. Upon returning to the United States, Adams worked at the New York Public Library from 1934-1938. In 1938, he left to become an assistant to the director of libraries at Columbia University, working with their special collections. Adams moved to Greensboro, NC in 1945 to assume the duties of the library director at UNCG.

During his 24 years at UNCG, Adams was instrumental in helping to grow and expand library services on the campus. This included overseeing the design and construction of Jackson library, which opened in 1950. Adams grew the book collection from 114,185 titles to over 400,000. He founded the Friends of the Library in 1958, while also enhancing and creating special collections of books and other materials in the library and university archives. Adams left UNCG in 1969 to work at the University of Hawaii as the Director of Sinclair Library.

Adams retired in 1973 and was awarded an honorary doctorate from UNCG in Humane Letters in 1978. He passed away on December 8, 1990.