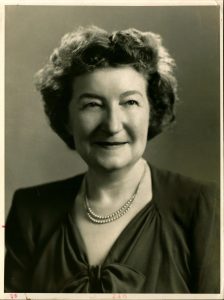 Clara Booth Byrd first came to the State Normal and Industrial College (now UNCG) in 1908 as a student.  In July 1913, she received her Bachelor of Arts degree. After entering the college, she quickly became involved in the administration.  She taught classes for the Commercial Department (1909-1922) under E.J. Forney and worked as an assistant to the college treasurer (1916-1922).

In 1922, Miss Byrd embarked on a new path at the college.  She became the Alumnae Secretary and editor for the Alumae News.  Over the next 25 years, Miss Byrd would revolutionize the role of the Alumnae Secretary, increasing the quality and consistency of documentation on the college’s graduates and revamping the alumni publication.  She established a office to organize and hold alumnae records and serve as a station for local clubs and associations.  Miss Byrd was heavily involved in alumni and community organizations, serving as vice president of the American Alumni Council, first vice president and director of institutes for the North Carolina Federation of Women’s Clubs, and editor for the Council of Women in Education.  She was also a member of the Guilford Battle Chapter of the DAR, the Historical Museum, Friends of the Public Library, the YWCA, and other local church societies.
Her crowning achievement as Alumae Secretary was realized with the opening of the Alumnae House (now Alumni House) in 1937.  The building was designed by Penrose V. Stout of Bronxville, New York, and modeled after Homewood in Baltimore, Maryland.  Miss Byrd, along with President Foust, worked tirelessly to solicit donations from alumni and secure a appropriations from the North Carolina Legislature.  The Great Depression temporarily halted plans for construction, but with the aid of WPA workers, the building become reality.
In 1947, Miss Byrd resigned from her position at the college, but she continued to be an active member of the community.  She traveled throughout state, speaking to clubs and associations on various topics.  She became the founder and first president of the Historical Book Club, where she served for eighteen years (1947-1965).  During the late 1960s, she served as the president of the Friends of the Walter Clinton Jackson Library (now Friends of the University Libraries).
Miss Byrd passed away on May 22, 1985.  Her memorial was held at the Alumni House.