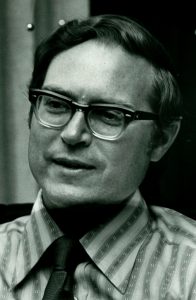 Clifford Lowery was Dean of Student Activities, Dean of Students, and Director of Cultural and Co-Curricular Programs for the University of North Carolina at Greensboro (UNCG) from 1972 to 1988. A Florida native, Lowey attended Wake Forest University and received his B.A. in 1965. He taught high school in Winston-Salem, and then became the Director of Special Programs at North Carolina State University in 1966-67. In 1967, he became Director of Student Activities at Guilford College. He obtained his M.Ed. from UNCG in 1970. After leaving Guilford College in 1972, he assumed his first post at UNCG in 1972, as Dean of Student Activities. In 1978, he completed his doctoral dissertation and received his Ph.D. from UNCG. In December of 1988, Lowery resigned from UNCG under a legal cloud. Due to budget constraints, the UNCG administration had voted down a plan of Lowery’s to replace the outdated sound system of Aycock Auditorium. Lowery then devised his own behind-the-scenes plan to replace Aycock’s sound system. Lowery agreed to a lease-purchase deal with a former student, Jay Lee “Tim” Cummings, who was in the audio-video production business. According to the agreement, Cummings would procure the sound system for Aycock and make the lease payments by renting out Aycock for his audio and video productions. Then—in Lowery’s plan—UNCG would buy the system when it had enough money. Lowery pleaded guilty to a misdemeanor charge of failing to fulfill the duties of his office, by not following the bidding process in buying the equipment.  Prosecutors agreed to reduce felony charges against Lowery in exchange for the plea. Lowery received a suspended prison term and was ordered to pay $5,000 in restitution to a firm that financed the $120,000 sound system. After leaving UNCG, Lowery formed his own publishing business. He returned to academia in 1997 as Director of Minority Student Affairs at NC A&T State University.