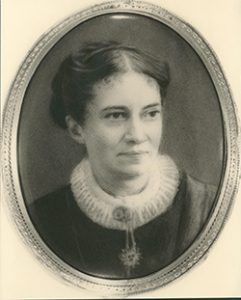 Cornelia Phillips Spencer was born in 1825 in Harlem, New York and moved to Chapel Hill, North Carolina in 1826 when her father, James Phillips, took a position as a professor and chair of the mathematics department at the University of North Carolina at Chapel Hill (UNC). In 1855, she married James Munroe Spencer, a lawyer and moved to Alabama. After his death in 1861, she returned home to Chapel Hill. Following the Civil War, Cornelia came to regard the changing faculty and administration of UNC as corrupt “carpetbaggers” and political opportunists. In an effort to protest such changes, she launched a public campaign to close the University, which it did in 1871. Likewise, she was successful in campaigning for its reopening in 1877. Founder and President of the State Normal and Industrial School (now UNCG), Charles Duncan McIver was a student at UNC in 1877 and viewed Cornelia Spencer as an inspiration. It is said that McIver’s passion to educate women came directly from his exposure to Cornelia Spencer. In 1895, she became the first woman to receive an honorary degree from UNC. Cornelia Phillips Spencer died in 1908.

Spencer Residence Halls are named in her honor.