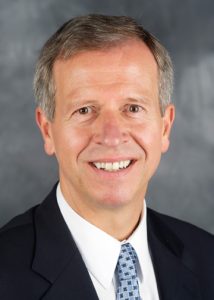 David H. Perrin was Provost and Executive Vice Chancellor at the University of North Carolina at Greensboro (UNCG) from 2007 to 2014, and Dean of the School of Health and Human Performance at UNCG from 2001 to 2007. Under Perrin’s leadership as Dean of the School of Human Performance, a Center for Women’s Health and Wellness was established, and two new doctoral programs—the Doctor of Public Health and the Ph.D. in Communication Sciences and Disorders—were established in their respective departments. Prior to joining UNCG, Perrin had directed the graduate programs in athletic training and sports medicine at the University of Virginia (UVA) since 1986 and was chair of the Department of Human Services at UVA from 1999 to 2001. Perrin earned his B.S. in physical education at Castleton State College (now Castleton University) in Vermont, in 1976, and an M.A. in physical education from Indiana State University in 1977. He received his Ph.D. in Exercise Physiology from the University of Pittsburgh in 1985. Perrin left UNCG in 2014 to become Dean of the College of Health and Professor of Exercise and Sport Science at the University of Utah.