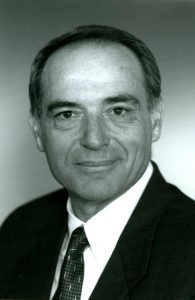 Donald DeRosa served as the Dean of the Graduate School and associate Vice Chancellor for research, as well as holding the rank of professor of psychology, from 1985-1990. In 1990, he succeeded Elizabeth Zinser as Vice Chancellor of Academic Affairs, an office which underwent a name change to Provost in 1991. DeRosa served as Provost during a difficult period of tuition increases and budget cuts for the UNC system. He initiated the Undergraduate Assistant Program to get undergraduates involved in research, and oversaw the implementation of new accelerated programs, as well as a new Teacher’s Academy at UNCG. DeRosa continued as Provost until his departure from UNCG in 1996, when he assumed the presidency of the University of the Pacific, in Stockton, California, a post he held until his retirement in 2009. Before coming to UNCG, DeRosa had spent 17 years at Bowling Green State University in Ohio as a psychology professor.