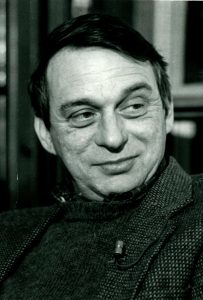 Fred Chappell (1936–) was an English professor at the University of North Carolina at Greensboro (UNCG) from 1964 to his retirement in 2004. He helped establish the MFA in writing program at UNCG. In 1986, Chappell received the O. Max Gardner Award, the highest honor the UNC system can bestow on one of the system’s faculty members. Chappell is a widely known and respected poet, novelist, and essayist, who has won many prestigious and coveted literary awards in his long career, including the Aiken Taylor Award for Modern American Poetry, the Prix de Meilleur des Livres Etrangers, the Bollingen Prize, and the T. S. Eliot Prize. He was named Poet Laureate of North Carolina in 1997, and held the position until 2002. Born on a small farm outside of Canton, North Carolina in the Appalachians, Chappell’s work most often draws upon childhood memories, the character of his home region, and the Southern experience. He is known for merging Appalachian settings with fantastical elements in his poetry and stories. His novels and short stories have sometimes been described as “Southern Gothic,” and have drawn comparisons to luminaries of that tradition such as William Faulkner and Flannery O’Connor.