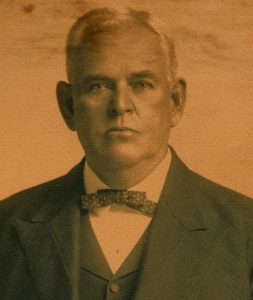 George Washington Hinshaw was a merchant and banker who served on the Board of Directors of the State Normal and Industrial College (now the University of North Carolina at Greensboro) from 1910 until his death in 1918. He was born in 1847 in Chatham County, North Carolina and at the age of 17, enlisted in the Confederate Army where a wound left him with impaired eyesight for the rest of his life. After the war, he made his home in Winston, North Carolina and began work as a clerk in a general store. Throughout the latter half of the 19th century, Hinshaw become a successful merchant in Winston, soon owning the store where he began working. His store was notable for employing the first woman clerk in the city. He was also one of the founders of the Winston Chamber of Commerce and would later serve as its president. Due to his eyesight, Hinshaw never achieved the level of education he desired, and perhaps this in part is why he became an advocate for public education. Soon after the State Normal and Industrial School (now UNCG) was founded in 1891, Hinshaw became a large and frequent donor to the school. The Hinshaw Residence Hall, which opened in 1922, is named in his honor.