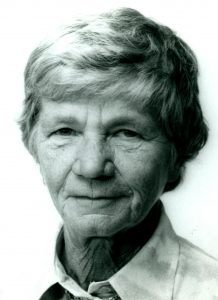 Ellen Jean Griffin was a professor of physical education at the Woman’s College (later known as UNCG) from 1940 to 1968, and was one of the pioneers of women’s professional golf in the United States. After graduating from the Woman’s College in 1940 with a degree in Physical Education, she immediately joined the faculty of the same department. In 1943, she received her M.A. from the University of North Carolina at Chapel Hill. Griffin would continue on to become a prominent figure in sports and physical education.  She was one of the three original organizers of the Women’s Professional Golf Association (now the Ladies Professional Golf Association, or LPGA). She also became UNCG’s first women’s basketball coach in 1963.  In 1962 she was the Ladies Professional Golf Association’s unanimous selection as national “Teacher of the Year.” That same year, Griffin founded her own golf teaching facility, which she called “The Farm.” She left UNCG in 1968 to devote herself full time to teaching at The Farm. In 1980, she received UNCG’s Alumni Distinguished Service Award. Griffin was widely recognized as a master teacher of golf, and taught thousands of to play golf at The Farm, until her death in 1986.