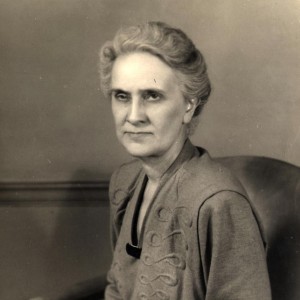 Helen Barton was born in Baltimore, Maryland on August 9, 1891. She attended Goucher College (Woman’s College of Baltimore until 1910) and graduated in 1913. The year after her graduation, Helen Barton served as an assistant in physics at Goucher and the following year did graduate work in mathematics and physics at Johns Hopkins. From 1915 until 1919, Helen Barton served as a head of the department of chemistry and physics at Salem College in Winston-Salem, NC and was an instructor in mathematics at Wellesley College for the two years after that. She continued her graduate work at Johns Hopkins in the summers of 1920 and 1921 and at Harvard in the winter of 1921 while teaching at Wellesley. She received her master’s degree from Johns Hopkins in 1922. In 1921, she moved to Albion College in Michigan, where she was an associate professor of mathematics. The doctorate was awarded in 1926 with physics as her first subordinate subject and applied mathematics as the second. Helen Barton spent the year after as as professor and department head at Alabama College (today’s University of Montevallo).

In 1927, Barton joined the faculty of the Department of Mathematics at the North Carolina College for Women (now UNCG), where she was to remain until her retirement. She began her career as associate professor and acting head of the department. In 1928, she became full professor and head of the department. She retired in 1960 as professor emeritus at the age of 68 but continued teaching part time. In additon to teaching and chairing the mathematics department, Barton was active both on campus an in various professional groups including the faculty science club, the campus chapter of Phi Beta Kappa, AAUW, the NC Education Association, and the NC Academy of Science.

Helen Barton died in Greensboro on March 19, 1971 at age 79 and was buried in Baltimore.