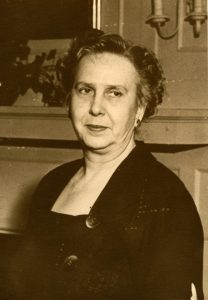 Ione Grogan was a mathematics professor and residence hall counsel in the Coit and Weil dormitories at the Woman’s College (now UNCG) from 1935 to 1958. Born in Reidsville, North Carolina in 1895, she received two A.B. degrees from the Woman’s College, one in English in 1913 and a second one in mathematics in 1926. She earned her M.A. in mathematics from Columbia University in 1928. From 1913 through the 1920s, she taught English in middle and high schools in North Carolina and Georgia. During her many years in Greensboro, she was active in the Democratic Party and the Greensboro League of Women Voters. She was also the president of the Reviewers Club, the oldest literary club for women in the state.  Grogan died in 1961, at the age of 66. The Grogan Residence Hall and the Grogan Residential College are named in her honor.