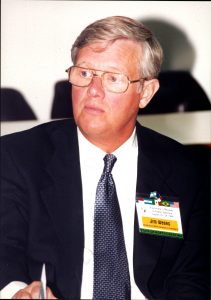 James K. “Jim” Weeks was Dean of the Bryan School of Business and Economics at UNCG from 1990 until his retirement in 2011. Born in 1945 in Fayetteville, North Carolina, he obtained his B.A. from Methodist College (now Methodist University in 1968, his M.B.A. from East Carolina University in 1970, and his Ph.D. in Business Administration from the University of South Carolina, in 1974. After two years as an assistant professor at the University of Delaware, Weeks came to UNCG in 1976 as an assistant professor on information systems and operations management. He worked his way through the faculty ranks to become a full professor in 1988.  He served as Associate Dean of the Bryan School from 1982 until his appointment as Dean in 1990, and as director of the MBA program from 1980 to 1984. During Weeks tenure as Dean, there were many milestones and achievements for the Bryan School, including the addition of six new degree programs, the expansion into international studies, and increasing its endowment six-fold.