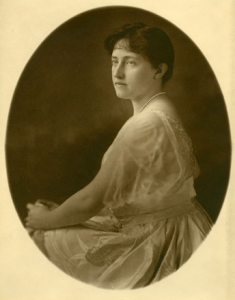 Katharine Smith Reynolds Johnston was born and raised in Mount Airy, North Carolina. She attended the State Normal and Industrial School (now UNCG) from 1897 to 1899 but did not graduate. Katharine left the campus after the typhoid epidemic of 1899, transferring to Sullins College in Bristol, Virginia, where she graduated in 1902. After graduation, she obtained employment as a secretary to the tobacco tycoon R.J. Reynolds, at the R.J. Reynolds Company in Winston-Salem, North Carolina. Katharine and R.J. married in 1905. Her marriage gave her access to great wealth with which she became a noted philanthropist. During World War I she became a major contributor to the American Red Cross. Besides her philanthropy, Katharine Smith Reynolds is known principally for two other achievements. One is the reform of the Reynolds tobacco factory. She worked to improve conditions for Reynolds’ workers, especially women, providing hot lunches, water fountains, and a nursery for working women, among other reforms. Katherine Smith Reynolds is also known for designing and building the Reynolda House, once a progressive, self-sustaining country farm and estate on 1,000 acres outside of Winston-Salem. Reynolda was a showcase for the latest in agricultural technologies, as well as providing recreational facilities and a school for workers. Reynolda House opened as a museum in 1967. After R.J. Reynolds died in 1918, she married school superintendent J. Edward Johnston in 1921. She died from an embolism several days after giving child birth at the age of 43, in 1924.  The Katharine Reynolds Smith Scholarship at UNCG was established especially for students involved in community service.