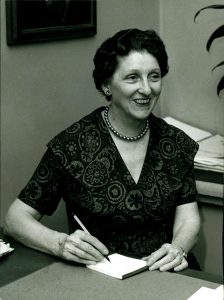 Kathleen Pettit Hawkins graduated from the North Carolina College for Women (now UNCG) in 1920, after completing a one year commercial course, and was immediately hired by then President Julius Foust as a secretary to Laura Coit, who was his own secretary. In 1937, she left the President’s office and began working in the financial aid office, where she would spend the next 30 years, until her retirement in 1967. From 1950 until her retirement in 1967, she was the director of financial aid at UNCG. Hawkins died in 1988. The Phillips-Hawkins Residence Hall is partly named in her honor.