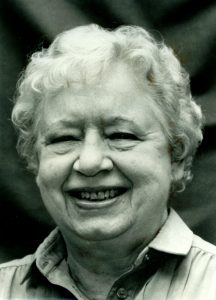 Mary Elizabeth Keister was born in 1913 in Mount Vernon, Iowa and was a professor and Director of Early Childhood Programs at The University of North Carolina at Greensboro (UNCG). She received her B.S. degree from the Women’s College (now UNCG) in 1934 and her M.A. in preschool education from the University of Iowa in 1936. Upon earning her Ph.D. in human development from the University of Chicago in 1949, Keister began working as a professor and department head of the Department of Child Development and Family Relationships at the University of Tennessee until she left in 1960.  From 1960 to 1964, she was the Home Economics Officer for the Food and Agriculture Organization if the United Nations, where she developed programs to train leaders on improving the lives of women and children around the world.  Keister returned to UNCG in 1965 as a Research Associate for the Institute for Child and Family Development.  She directed the university’s first federally-funded Infant Care Center in 1966, now part of the Child Care & Education Program.  Her research in the 1960s and 1970s brought national attention to UNCG as the growing trend of mothers entering the workforce launched the university’s model day-care program that was one of the first in the country.  She was a consultant in all 50 states to supply research findings on day care centers.  In 1974, Keister received the O. Max Gardner Award, the highest honor the UNC system can bestow on one of the system’s faculty members. She retired from UNCG in 1978.  Keister died in 2012 at the age of 99.