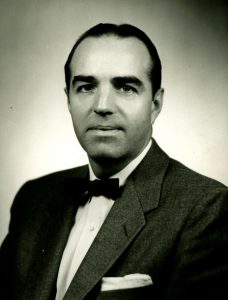 Kenneth Howe was a Professor of Education and Dean of the School of Education at the Woman’s College (and later UNCG) from 1958 to 1967.  A native of Michigan, Howe received his B.S. degree in Math and Science from Eastern Michigan University in 1935, and his M.A. degree in Guidance and Personnel from the University of Michigan, Ann Arbor, in 1938.  He began doctoral studies at Colombia University in 1939, but the start of World War II interrupted his education. During World War II, he served as an Educational Services and Training Officer for the Command of the Western Caroline Islands. Upon his return to civilian life, he resumed graduate studies and earned his Ed.D. degree from Northwestern University in 1947.  He spent two years as an Assistant Professor of Elementary Education at Ball State College (later Ball State University) and three years as Professor and Chairman of the Education Division at the State Teachers College in New Paltz, New York.  From 1952 to 1957, just prior to his appointment at the Woman’s College, he was Director of the Children’s School, National College of Education, in Evanston, Illinois.  In 1967, Howe resigned as Dean of the School of Education to return to full-time teaching at UNCG, but very quickly departed UNCG for Kabul, Afghanistan, to become an education adviser for the U.S. Agency for International Development.