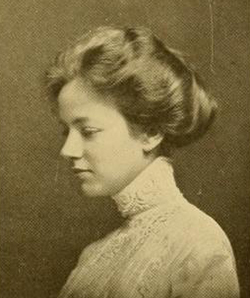 Laura Weill was born in 1888 in Wilmington, North Carolina. She graduated in 1910, with honors, from the North Carolina State Normal and Industrial School (later UNCG). While at the State Normal, she was a member of the Adelphian Society, Editor-in-Chief of the State Normal Magazine, Editor of the The Carolinian, Class President, and Vice President of the Athletic Association. In addition, she wrote the lyrics to The College Song (using a tune by W.A. White) which is still played at Commencement and other university events. In 1916, she married Julius W. Cone, president of the Cone Export Commission Company (a division of Cone Mills). As a civic leader and philanthropist in Greensboro, she was passionate about education. She served for twenty-two years as a member of the Board of Trustees of The University of North Carolina, as a member of its executive committee from 1934 until 1953, and as one of the chief builders of The Consolidated University of North Carolina. She also made substantial donations to the Woman’s College (later UNCG) and to Bennett College in Greensboro, where she was a member of the Board of Trustees for more than thirty years. Cone Residence Hall on the UNCG campus, which opened in 1967, is named in her honor.