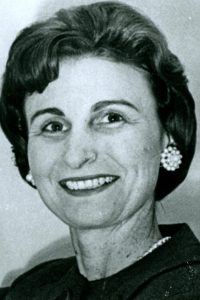 Lois Virginia Edinger was a professor of education at the Woman’s College (later University of North Carolina at Greensboro (UNCG)), from 1962 until her retirement in 1988. Born in Thomasville, North Carolina, in 1925, she received her A.B. from Meredith College in 1945. After graduation, she taught Social Studies and English for many years from elementary school to high school level in several towns throughout North Carolina. Edinger received her M.A.in history in 1959 and her Ph.D. in education in 1964, both from the University of North Carolina at Chapel Hill.

During the early 1960s, Edinger served as a high school history instructor for the Governor’s Commission for Educational Television’s “in-school TV experiment,” teaching classes via television on WUNC-TV. In 1964-65, took a leave of absence from UNCG when she was elected and served a one year term as the president of the National Education Association (NEA). The lobbying efforts of the NEA during her term as president are credited with helping to pass President Johnson’s aid-to-education bill in 1965.

In 1966, she received the O. Max Gardner Award, which is the highest honor the UNC system can bestow on one of its faculty members. In 1973-1975, Edinger served as a representative of the Associated Schools Project sponsored by the United Nations Educational, Scientific, and Cultural Organization (UNESCO). In that capacity, she traveled to Pakistan, Kenya, and Malaysia, to exchange materials, methods, and curriculum models with participating schools and instructors in an effort to broaden intercultural education. In the late 1970s and through 1980, Edinger worked as director of a federal grant program to develop international studies facilities for a consortium of area colleges and universities, including UNCG, N.C. A&T, Guilford College, Greensboro College, High Point College, and Bennett College.