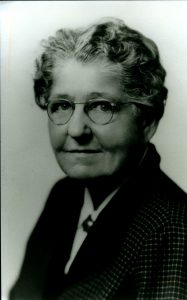 Louise Brevard Alexander was born in 1887 in Hickory, North Carolina. She graduated from Presbyterian College (now Queen’s College) in Charlotte, where she was president of the student body, president of her literary society, editor of the yearbook, captain of the Daddy Rabbit Tennis Team, and a member of many other clubs, including the Epicureans. After graduating from Presbyterian College in 1907, Alexander pursued graduate studies at the University of Tennessee before taking a faculty position at Lees-McRae College in Banner Elk. In 1911, she moved to Greensboro to teach history, civics, and economics at Greensboro Senior High School (now Grimsley High School). She left to attend law school at the University of North Carolina at Chapel Hill and was admitted to the North Carolina Bar in 1920. Upon her return to Greensboro, she became Guilford County’s first female lawyer. Alexander was appointed as the Clerk of Municipal Court in 1923, and she served concurrently as a juvenile court judge until 1935. In 1935, she began her tenure as a political science professor at the Women’s College (now UNCG). In 1949, Alexander was awarded the first O. Max Gardner award and in 1960 was recognized again with the dedication of a room in the Elliott University Center. Alexander passed away on May 30,1978.