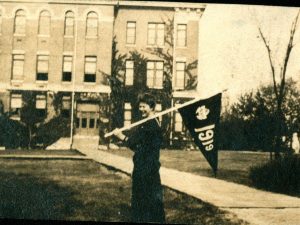 Mary Foust was the daughter of the University’s second president, Julius Isaac Foust, who served as president from 1902 to 1934. The Mary Foust Residence Hall, constructed in 1928, just three years after her untimely death, is named in honor of Mary Foust.  Mary graduated from Greensboro High School, and the 1915 yearbook describes her as “a splendid geometry student” and “popular and attractive.”  Mary was a graduate of the Women’s College, class of 1920.  She married John Robert Armstrong and they had one daughter, Sarah, born on July 6, 1925.  Two days later, on July 8, Mary died of complications from the birth.  She was 27 years old.