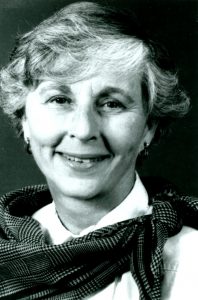 Mary W. Olson was Dean of the School of Education at UNCG from 1995 until her retirement in 1997, and Associate Dean from 1988 to 1995.  A native of Fort Worth, Texas, Olson received her B.A. in reading education from Trinity University in San Antonio, Texas in 1955.  She held various elementary school positions in Okinawa (where she met her future husband, Don Olson), Southern California, and Montana, before the birth of her first child in 1961, at which time she became a stay-at-home mom.  In 1961, the new family moved back to her home state of Texas.  She returned to the classroom in 1970, and earned her M.Ed. from Southwest Texas State University in 1977.  She became an instructor at Southwest Texas State, and worked up through the ranks to associate professor, earning her Ph.D. from the University of Texas-Austin, in 1982.  In 1986, Olson accepted an appointment as chairperson of the Elementary Education Department at the University of South Florida in 1986, holding that post until her appointment at UNCG as Associate Dean in 1988. The Don and Mary Olson Scholarship in Reading is awarded annually to a part-time MA degree candidate in Reading Education. Mary Olson died in 2016 at the age of 82.