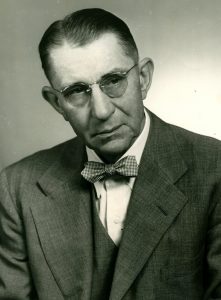 Franklin Holbrook McNutt was Dean of the School of Education at the Woman’s College (later the University of North Carolina at Greensboro) from 1941 to 1946. Before coming to the Woman’s College, he was head of the Department of Education at the University of Cincinnati. A native of Ohio, McNutt began his career in education at the age of 17 as an elementary school teacher in rural Ohio and Indiana. He would admit many years later that he lied about his age to county school officials. In 1916, he obtain his A.B. from Wittenberg College and later received his Ph.D. in educational psychology from Ohio State University in 1932.

After resigning from the Dean’s position in 1946, McNutt returned to teaching in the Education Department, and was appointed Associate Dean of the Graduate School. He retired from these posts in 1958. McNutt received the O. Max Gardner Award, the highest honor the UNC system can bestow on one of the system’s faculty members, in 1954.

In 1971, the McNutt Center for Instructional Media was named in his honor. It has been called the McNutt Building since 1987. McNutt died in 1980, at the age of 90.