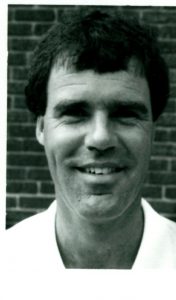 Michael Parker was the head coach of the UNCG’s men’s soccer team from 1984 to 2010. Originally from Bradford, England, Parker earned his Bachelors of Science at Madeley College in Staffordshire, England in 1968 and a Masters of Education degree from UNC Chapel Hill in 1971. Within two years of becoming the head coach at UNCG, he won the Division III National Coach of the year and the Dixie Conference Coach of the year. During his tenure as a head coach at UNCG, he compiled a record of 382-164-26 and won three NCAA men’s national championships. He led the Spartan program to the NCAA tournament 15 times and in 2004, the team spent four weeks as the consensus number one ranked team in the nation. In September 2005, Parker was induced into the UNCG Athletics Hall of Fame, making him the first male coach to be inducted while still active. He was induced into the Guilford County Hall of Fame in 2007.