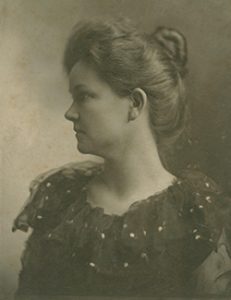 Minnie Lou Jamison was a student in the first class at the State Normal and Industrial School in 1892 and four years later she accepted a faculty position in the Department of Economics. She continued to work for the school until 1915 when she took a leave of absence to become the home demonstration agent for the North Carolina Department of Agriculture. In this position Jamison formed the rural women’s club which supported studies in foods, healthy diets, meal efficiency and food conservation. She also created a pamphlet titled “Plans for community club work in the study in foods and household conveniences” that was distributed by the US government and in many foreign countries through its three printings. In 1917 Jamison came back to the school to support preparation efforts for WWII and she did so by teaching a ten-day course about nutrition. She taught 200 sessions throughout North Carolina in this course and reached roughly 18,000 women. In the following year, she became the secretary for the North Carolina College Volunteer Workers and of the Women’s Land Army where she created and implemented units of each at most colleges through the state. After the war, she continued her work in the Home Demonstration extension of the Home Economics department at the University. In 1922 Jamison suffered a nearly fatal car accident which caused her to take a two-year leave from the University. When she returned in 1924 she became a freshman counselor. By 1936 she became a part-time head of the students building and counselor of social activities. In 1939 a residence hall was named after her and that years Pine Needles yearbook was dedicated to her and her contributions to the University. Minnie Lou Jamison passed away in January of 1948 at the age of 81.