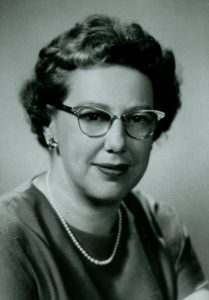 Margaret Mordy was the Dean of the School of Health, Physical Education, and Recreation at the University of North Carolina at Greensboro (UNCG) from 1974 to 1979. Immediately prior to her appointment at UNCG, Mordy served as chair of graduate studies with the School of Health, Physical Education, and Recreation at Ohio State University from 1970 to 1974. From 1968 to 1970, she was assistant Dean of the College of Education at Ohio State. Born and raised in Iowa, Mordy received her A.B. degree from Grinnell College in 1936, and her M.A. from the University of Iowa in 1942. After stints as an instructor at the University of Iowa, a program director for the American Red Cross in Brazil and the Philippines, and as an assistant professor at Wayne State University, she returned to graduate school and earned her Ph.D. from the University of Chicago in 1957. She died in 1991 at the age of 77.