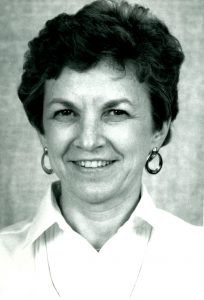 Nancy Vacc was a professor in the Department of Curriculum and Instruction, School of Education. At UNCG from 1987 to 2003.  After obtaining her B.S. in Music in 1968 from the Crane School of Music in Potsdam, New York, she earned her M.S. in Elementary Education and Reading from State University College in Fredonia, New York in 1971.  After obtaining her masters, Vacc taught elementary school students with learning disabilities in Fredonia until 1979, and then, moving to Greensboro, continued her teaching of learning disabled students in Guilford County schools until 1985, the year she earned her Ed.D. in Curriculum and Teaching from UNCG.  From 1985 to 1987, Vacc was an Assistant Professor at Bennett College in Greensboro.  In 1987, she joined the faculty in the Department of Curriculum and Instruction, School of Education, as an Assistant Professor.  Vacc was promoted to full Professor in 1997, and retired in 2003, a year after the death of her husband, Nicholas A. Vacc, a professor at UNCG for 23 years.  In 2016, Vacc made a planned gift in the amount of $725,000 to establish the Vacc Women’s Golf Scholarship Endowment for the women’s golf program.  It was the second largest overall gift and the largest planned gift ever received by UNCG Athletics.  Several other scholarships at UNCG carry the Vacc name as a result of the generosity of Nancy and Nicholas Vacc: the Nancy Nesbitt Vacc Doctoral Fellowship in Elementary Education, the Nicholas A. and Nancy N. Vacc Distinguished Professorship, and the Nicholas A. Vacc Doctoral Fellowship in Counselor Education.  In addition, in 2004, Nancy Vacc donated the Nicholas A. Vacc Bell Tower at UNCG, and in 2015, made a gift of 24 carillon bells to the tower, making it a full carillon of 49 bells