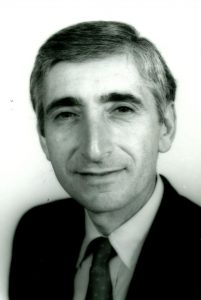 Nicholas A. Vacc was a professor at UNCG for 23 years, from 1979, until his death in 2002, and served as head of the Department of Counseling and Educational Development from 1986-1996.  Vacc received his B.S. in Education from Western Reserve University in 1961, his M.S. in School Psychology and Counseling from Syracuse University in 1963, and his Ed.D. in Counseling from State University of New York, Albany, in 1967.  After serving as the Director of Counseling at the State University of New York, Fredonia from 1967 to 1973, Vacc became an Associate Professor there, and a full Professor in 1975.  In 1979, Vacc came to UNCG as a full professor in the Department of Counseling and Educational Development in the School of Education at UNCG.  Along with his wife Nancy, also a professor at UNCG, Nicholas Vacc was a generous donor to the University, and thus, several scholarships at UNCG carry the Vacc name, including the Nicholas A. and Nancy N. Vacc Distinguished Professorship, and the Nicholas A. Vacc Doctoral Fellowship in Counselor Education.  In addition, in 2004, Nancy Vacc donated the Nicholas A. Vacc Bell Tower at UNCG, and in 2015, made a gift of 24 carillon bells to the tower, making it a full carillon of 49 bells.