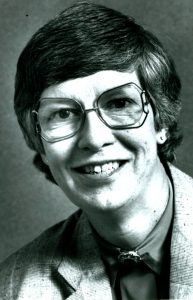 Patricia Chamings was a professor of nursing, and Dean of the School of Nursing at UNCG from 1985 to 1990. Born in 1940 and raised in Florida, Chamings received her B.S.N. and M.S.N degrees from the University of Florida’s College of Nursing in 1964 and 1965, respectively. After graduating, she taught at the University of Florida’s College of Nursing until 1969, when she left to join the nursing faculty at Vanderbilt University as an associate professor of nursing. In 1984, she left Vanderbilt to serve as the assistant Dean of the School of Nursing at Emory University. Along with her career in academia, Chamings also served as a nurse in the Air National Guard from 1970 to 2000, achieving the rank of Colonel in 1988. She retired from her civilian career as a nursing professor and administrator in 2005.