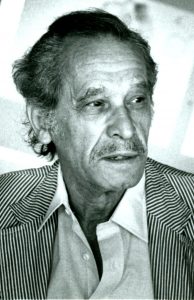 Peter Agostini was a major American sculptor of the twentieth century who worked as a professor of art at the University of North Carolina at Greensboro (UNCG) from 1966 to 1985. Largely self-taught, Agostini was had less than two years of formal training (1935-1936) at the Leonardo da Vinci School in New York. Despite this, he became a critically acclaimed artist and received international attention. His sculptures are displayed in more than a dozen major collections across the United States, including the Museum of Modern Art in New York City. In 1939, Agostini joined the Works Progress Administration (WPA) Arts Project. During his time with the WPA, Agostini met and formed lifelong friendships with other artists such as Jackson Pollock and Willem de Koonig. Before coming to UNCG in 1966, Agostini had been a professor in the Department of Painting and Sculpture at Columbia University. Although he was nominated by UNCG in 1980 for the prestigious O. Max Gardner Award (the highest honor the UNC system can bestow on one of its faculty members), he did not win the award. Agostini once quipped that “Artists are never accepted, because they do what they want.” Yet, Agostini did achieve wide acceptance and accolades for his sculpture during his lifetime. Having first become known as an abstract expressionist sculptor, he helped to launch the Pop Art movement in the 1960s (together with Andy Warhol) with his plaster cast sculptures of beer cans, eggs, pillows, and balloons. Agostini officially retired from UNCG in 1983, but continued on as a “visiting professor” for two years until 1985. He died in 1993, at the age of 80.