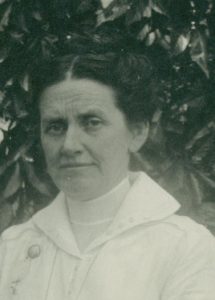 Virginia Ragsdale was a professor of mathematics at the Woman’s College (later the University of North Carolina at Greensboro) from 1911 until her retirement in 1928. She was one of the most famous and distinguished mathematicians of her generation. Ragsdale is best known as the creator of the “Ragsdale Conjecture,” a theory concerning algebraic curves, which though disproven in 1979, was influential in the field for more than seven decades since Ragsdale had proposed it. Born in Jamestown, North Carolina in 1870, she was educated at Salem Academy, where she was valedictorian of her graduating class in 1887. She then attended Guilford College, where she was once again valedictorian of her graduating class in 1892. She received a scholarship to Bryn Mawr College, in Pennsylvania, and completed her Ph.D. work there in 1903. When Ragsdale came to the Woman’s College in 1911, she was only the third faculty member to have earned a Ph.D. degree.  Before coming to UNCG, Ragsdale taught at a private school in New York, and then for a time, was head of the Department of Mathematics at the Baldwin School at Bryn Mawr. She retired from the Woman’s College in 1928 to care for her aging and sick mother.  Her later years were spent at Guilford College, where she built a large home on campus which now serves at the President’s residence. She died in June 1945.  The Ragsdale-Mendenhall Residence Hall is partially named in her honor.