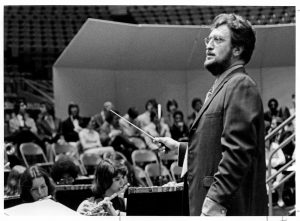 Raymond J. Gariglio came to UNCG in 1966 as a Professor of Music and became the bandmaster for all UNCG performing band ensembles, many of which he founded himself. In 1969, he established the UNCG Jazz Ensemble, the first university-accredited jazz ensemble in North Carolina, and by 1983, his tireless work in the field had laid the groundwork for the development and debut of UNCG’s Miles Davis Jazz Program to begin offering undergraduate degrees. In addition to developing funding and support for the program, including beginning a series of benefit concerts in 1974 funding the university’s first Jazz Scholarship Fund, Gariglio also personally designed and developed the curriculum for the new program’s teaching of Band Literature, Clarinet Performance, Instrumental Methods, Jazz Arrangement, Jazz Ensembles, Jazz Improvisation, and Wind Ensembles, laying the foundation for faculty to come to improve upon.

As a member of the Greensboro musical community, Gariglio was also heavily involved in its performance and musical landscape for his entire residency, up until his death in 2003. His various performing ensembles were frequent staples of Greensboro society, performing at country clubs, benefit events, and community concerts, as well as acting as a soloist for many local high school and children’s festival band performances.