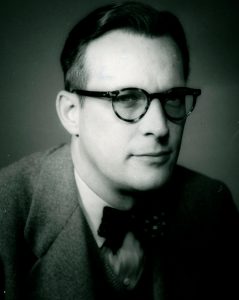 Richard Bardolph was a professor of United States history at the Women’s College (later The University of North Carolina at Greensboro (UNCG)), from 1944 to 1980. He served as head of the history department from 1960 to 1978. He was a writer of countless newspaper editorials, was widely published in his discipline, and was regarded as a pioneer in historical research in the field of race and civil rights. In 1959, he published The Negro Vanguard, a well-known book, which explored the lives of early African American professionals in a variety of fields. Earlier, in 1947, Bardolph joined with other Greensboro educators to persuade city merchants to remove Jim Crow signs from drinking fountains and restrooms.  His social conscience affected his religion as well, when in 1964, during the campaign for the passage of the Civil Rights Act, he persuaded his conservative, white denomination, the Lutheran Church-Missouri Synod, to endorse civil disobedience as a Christian witness against racial segregation.

Bardolph also enjoyed some success as a poet, with many of his humorous poems being published in the New York Times, the Wall Street Journal, and, perhaps strangely enough, the New England Journal of Medicine (humorous poems with a medical theme). In the early 1960s, he taught several courses for college credit via television, broadcast by WUNC-TV, and in 1974, participated as an instructor in a nationwide “Courses by Newspaper” program, in which the Greensboro Daily News was a participating publication.  In 1979, Bardolph received the O. Max Gardner Award for Professional Excellence, the highest honor bestowed by the UNC system.

Bardolph was a popular teacher who was in demand as a public speaker throughout North Carolina. After his retirement from the University in 1980, Bardolph toured the state with a tape recorder, recording oral histories of Women’s College alumni. In 1986, he had a short-lived run as a Democratic candidate for the North Carolina House of Representatives, but was forced to withdraw from the race due to health reasons.