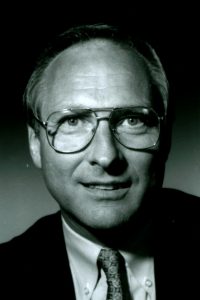 Richard A. “Dick” Swanson was a professor of exercise and sport science from 1980 to 2007, and Dean of the School of Health, Physical Education and Recreation at the University of North Carolina at Greensboro (UNCG) from 1980 to 1992. Swanson came to UNCG after being chair of the Department of Physical Education at San Francisco State University since 1977. From 1966 to 1977, he was an associate professor of physical education at Wayne State University in Detroit, Michigan, serving as chair of the Department of Physical Education there in 1973-74.  Swanson had received his B.S. and M.Ed. degrees at Wayne State (in 1961 and 1964, respectively) before going on to receive his Ph.D. in physical education from Ohio State University, in 1967. Swanson acted in community theater as a hobby, and starred in several critically well received productions at the Carolina Theater in Greensboro through the 1980s.  Swanson retired from UNCG in 2007.