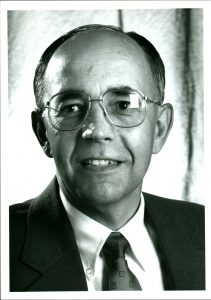 Dr. Robert (Bob) Christina was hired as Dean of the School of Health and Human Sciences and professor of Kinesiology at UNCG in 1992. Prior to coming to UNCG, he was chairman of the Department of Physical Therapy and Exercise and faculty member at the State University of New York in Buffalo. From 1973-1990, he professor of Exercise and Sport Science and director of the Motor Behavior Research Laboratory at The Pennsylvania State University. Christina received his bachelor’s degree from Ithaca College in 1962, and then went on to receive his master’s degree in 1965 and doctorate degree in 1970, both from the University of Maryland. He has been the recipient of many honors including being named Golf Magazine’s Innovators of the Year in 2008. He has co-published research that has been in the Wall Street Journal and the New York Times and has appeared on the Golf Channel, CNN and NBC. Throughout his scholarly career, he has written 150 scientific and professional articles, 11 books, and has given 400 scholarly and professional presentations throughout the United States and abroad. Christina retired from his Dean position in 2011 but currently retains the title of emeritus Dean of the School of Health and Human Sciences and Professor of kinesiology.