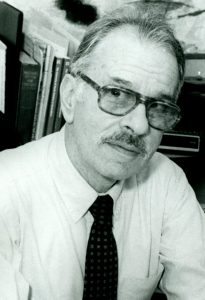 Robert L. Miller was Dean of the College of Arts and Sciences at the University of North Carolina at Greensboro (UNCG) from 1968 to 1985. Miller was born and raised in Chicago, and received his B.S. in biochemistry and his M.S. in biology from the University of Chicago, in 1949 and 1951, respectively. After being employed for several years as an instructor in physical science and chemistry at the University of Illinois at Chicago (UIC), Miller received his Ph.D. in chemistry from the Illinois Institute of Technology in 1963. He then returned to UIC as a professor of chemistry and an assistant dean.  Miller had achieved the position of associate dean of the College of Liberal Arts and Sciences at UIC before leaving that post to assume his Dean’s position at UNCG. As Dean, Miller saw the College of Arts and Sciences through the addition of several new departments and degree programs, and two major curriculum revisions (1971 and 1981, respectively). In 1970 he founded the Warren Ashby Residential College at UNCG, and in 1982, he led the initiative to establish an African American Studies minor at UNCG. Miller resigned in 1985 as Dean to return to the classroom full time as a professor of chemistry. He retired in 1998.