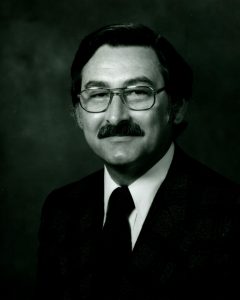 David Shelton was the first Dean of the Joseph M. Bryan School of Business and Economics, serving from its founding in 1969 until 1983. Prior to his appointment as Dean, Shelton was a Professor in the Department of Economics and Business Administration, beginning in 1965 and then serving as the department head in 1967. A native of Mississippi, Shelton attended Millsaps College where he received his BA degree in history in 1951. He continued on to earn his MA degree in 1952 and his Ph.D degree in 1958, both from the Ohio State University. From 1958 until his arrival at UNCG in 1965, Shelton was an Assistant and an Associate Professor of Economics at the University of Delaware.

Shelton was an aggressive advocate for the Bryan School, and it grew quickly under his leadership, adding several graduate programs in the first decade of its existence, including the MBA program. In 1980, after ten years of operating out of quarters scattered around campus, the Bryan School moved into the building it still occupies on Walker Avenue. In 1983, Shelton stepped down as Dean to return to the classroom. He again served as the Head of the Department of Economics, from 1988 to 1990. Shelton retired in 1993, after 28 years of service at UNCG.