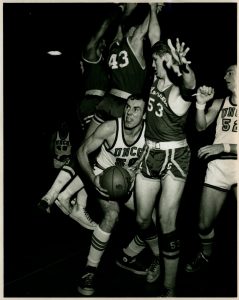 Originally from Burlington, North Carolina, Martin’s family moved to Greensboro and lived near campus in houses on Tate and Spring Garden streets. He attended the university-owned Curry School from grades 4-12. While he was at Curry School, he played on the Men’s Basketball team and set records for most rebounds (25) and points (50) in a game.

After graduating from Curry, Martin attended Gardner-Webb junior college before returning to Greensboro to enroll at UNCG. It wasn’t long before he recognized some fellow rival basketball players from his Curry School days. They encouraged him to join the newly-formed Men’s Basketball team at UNCG. Martin later said he didn’t even know they had a men’s team at that time. This was understandable since UNCG had only started accepting male students in the fall of 1964. It was the introduction of men’s athletics that also necessitated the need for a mascot for the school’s intercollegiate athletic teams. Martin joined the nascent team with eleven other students under coach Jim Swiggett and became the UNCG Spartans.

Although the team’s early seasons produced few wins, the team was largely competitive and Martin was a large reason for that. Martin, who was one of the team’s tri-captains, averaged 15 points a game and still holds the record for rebounds in a single game.

When he wasn’t playing basketball, Martin worked on his degree in Political Science and also met his future wife, and fellow UNCG student, Mary Hoyng (Class of 1971).

After graduation, Martin put his UNCG degree to work in a career that spanned 33 years of service in the Planning Department of the City of Greensboro. Beginning work as a Planning Technician and rising through the ranks to become Director of Planning, Martin retired in December of 2003.

He has volunteered and served in many capacities for UNCG including, but not limited to: Chairman of the Spartan Club (1992-1996), Tournament Director of 1997 and 1998 NCAA’s Women’s Soccer Championships (held at UNCG), Excellence Foundation member, UNCG Hall of Fame Committee Chairman, and University Planning Council member. In 2002, Martin made history again when he was elected president of the UNCG Alumni Association, the first male to hold that post. That same year, Martin was inducted into the UNCG Athletics Hall of Fame. Martin has also been recognized as one of UNCG Athletic’s biggest fans with the Super Spartan Award and was a recipient of the Alumni Association’s UNCG/WC Legacy Award (2014) for alumni who have made significant contributions that exemplify value, character, and high integrity.