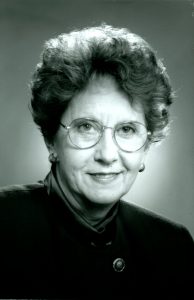 Vira Rogers Kivett was a research instructor in the Department of Child Development within the School of Home Economics at the University of North Carolina at Greensboro (UNCG) from 1960 to 1964, and again from 1968 to 1976. Born in Augusta, Georgia in 1933, she received both her Bachelor’s and Master’s degrees from the Woman’s College (now UNCG) in 1955 and 1960, respectively. She later received her Ph.D. from UNCG in 1976 and would go on to serve on the faculty of UNCG for a total of 39 years. She was an internationally recognized scholar in the field of social gerontology, especially in the study of rural aging, and was consulted by the Select Committee on Aging of the U.S. House of Representatives. Kivett was recognized in 1996 by the UNC Board of Governors for her service on behalf of the elderly when she received the O. Max Gardner Award, the highest honor the UNC system can bestow on one of the system’s faculty members. She retired in 1999.  In 2012, Kivett was inducted into the Southern Gerontological Society’s Hall of Fame.