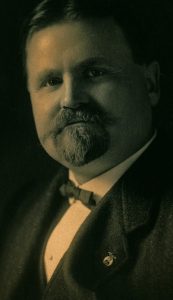 Wade R. Brown was born in 1866 in Venice, Ohio. In 1880, Brown attended Baker University where he later became a faculty member. While serving as the Dean of the School of Music at Meredith College, he was recruited by Julius Foust to join the faculty for the State Normal and Industrial school (now UNCG) in 1912. Brown performed his first Organ recital on Founders Day in October of 1912 and his performance sparked a renewed interest for music at the school. In 1920, Brown implemented the first statewide high school music contest-festival. Recognizing a growing need for music education at the university, he persuaded Julius Foust to construct two new buildings to promote music. The first building opened in 1925 and was called the Music Building (later renamed the Brown Building in his honor). The second building completed construction in 1926 and was named the Aycock Auditorium (now known at UNCG auditorium). In addition to his commitment to music on campus, Brown co-founded the Greensboro Civic Music Association. In 1934, Brown stepped down as head of the music department and fully retired in 1936. He passed away in 1950 in his retirement home in Florida.