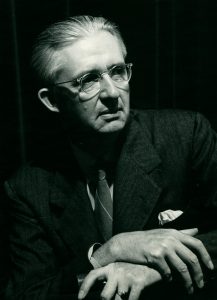 William Raymond Taylor was an English professor at the Woman’s College (later the University of North Carolina at Greensboro) from 1921 to 1961, but he is better known for being the founder of the University’s Drama and Speech Department. UNCG’s Taylor Theater is named in his honor.

A native of North Carolina, Taylor received his B.A. from the University of North Carolina-Chapel Hill in 1915, and his M.A. from Harvard in 1916, where he studied with prominent Shakespearean scholars, and became a close friend of the playwright Eugene O’Neill. He taught at Alabama Polytechnic Institute (later Auburn University) from 1916 to 1921, where he founded the drama department there, before coming to the Woman’s College. Throughout his 40 years at the Woman’s College, Taylor would divide his time between teaching language and literature and building the theater program. He organized the first drama group in 1923, called the Play-Likers. The Play-Likers would evolve into the Drama Department (now the School of Theater and College of Visual and Performing Arts). Taylor would direct more than 200 plays during his years at the Woman’s College. After his retirement in 1961, Taylor started a successful stage production and theater supply business with his son. During this time, Taylor and his son designed and installed staging for Las Vegas casinos, and materials for theaters all over the United States, and even in South America. He was an award-winning rosarian (a cultivator of roses). His garden eventually contained over 1200 rose bushes of 250 varieties. In his later years, Taylor also did extensive research in the field of theology, after experiencing what he called a “spiritual awakening” at the age of 75. He died in 1976, at the age of 81.